To: The petition is directed at the new mayor, Steve Krieg, the newly elected councillors and to the premier of New South Wales, Dominic Perrotet.

Prevent demolition of the Rainbow Temple 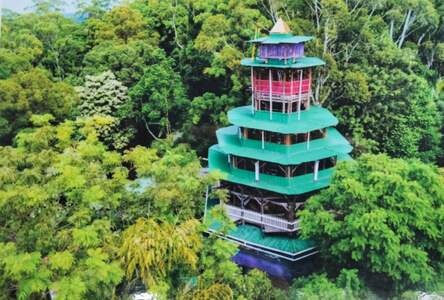 The Rainbow Temple is threatened to be demolished from its seven stories to just one story and its glow worm tunnel to be filled in by Lismore Shire Council. The Rainbow Temple petition is an appeal to the authorities of the Lismore City Council to allow the structure known as the Rainbow Temple along with it’s 65-meter underground tunnel to continue to exist without demolition.
The Rainbow Temple which lies in the heart of the Rainbow region, was built to represent the journey of life on Earth and to the great awakening of consciousness that will allow peace and harmony for mankind with each other and all the aspects of nature.
The Rainbow Temple is dedicated to creation, evolution and awakening. It deserves, due to it's solid and unique structure, to remain as an inspirational icon to all those that have had the good fortune to experience the wonderful, balanced energy that it provides, a true reflection of the natural and harmonious energy that the Rainbow region is recognised for. Nowadays the main structure of Rainbow Temple is threatened to disappear as it does not have an approved Development Application (DA) and is not compliant with Council requirements..

The petitioners wish for the Lismore City Council to assist in The Rainbow Temple becoming a universal heritage site. Regarding this we ask the following:

1. Lismore Shire Council stops the demolition of the Rainbow Temple and cooperates with the Rainbow Temple team giving them time for fundraising, applying for appropriate development approvals and remediation action to take place. The Rainbow Temple will protect and improve the glow worm tunnel to provide a Ideal safety habitat and a way for humans to interact and see these beautiful creatures.

2. Heritage NSW approves the Rainbow Temple to be added to the NSW Heritage list. The Rainbow temple will apply for NSW and then National Heritage listing under the Universal Heritage category. It qualifies for heritage under the criteria of (i) masterpiece of human creative genius (ii) it exhibits an important interchange of human values, is a development of monumental arts (iii) it was built in respect of the cultural traditions of the indigenous Bundjalung Nation and of the unique settler culture of the Northern Rivers NSW and (iv) is an outstanding example of human interaction with the environment especially with a collection the threatened native rainforest and protected species

2. Filling in the tunnel will destroy the unique and naturally made habitat of glow worms (a rare species only born in some areas of Australia and New Zealand). Also affecting protected species such as microbats, frogs, snakes and Koalas who are living in the surrounding ecosystem characterised by native rainforest plants and trees of the area

3. Stopping people from visiting and staying at the temple would remove a future potential significant tourist attraction, reducing visitors, employment and revenue for the local area.

4. The temple has provided sanctuary for many people over the years. This service would be lost.