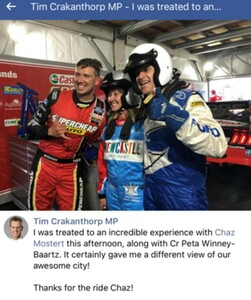 Conduct a full investigation on why the City of Newcastle has raised rates by 60% the majority of which was granted by iPart for infrastructure upgrades instead it was spent on luxury projects such as luxury rented Council offices that are inaccessible to ratepayers and the super loss event Supercars. The Council offices has incorporated 1000 squares for the LM Nelmes and the GM Jeremy Bath. Supercars spend has been estimated at $60m of ratepayer monies. In the meantime Newcastle roads and footpaths are dangerous, cracked and potholed (except for the Supercars track) and infrastructure is crumbling. The city is covered with graffiti, dirt, weeds and disrepair. Public facilities are dirty and dangerous to use.

1 CoN has the fifth highest residential rates in NSW and vulnerable ratepayers are under cost of living stress
2 CoN has one of the highest commercial rates in NSW and many small business, landlords, tenants and superannuation property owners are under financial stress.
3 The GM has declared that Newcastle City Council to run like a corporation. However the shareholders are reluctant ratepayers.
4 CoN is non-transparent and unaccountable in their spending
5. CoN fudges economic contribution reports such as the Supercars research to suit its self vested agendas and bad decision making. This has been validated by leading mathematician, Dr Janet Aisbett who reported that the UON Hunter Research fudged the Supercars benefits by 55%. This fudged research is still on the CoN website.
6. CoN uses city rates to instigate legal action on dissenting ratepayers, including community groups, business, staff and business organizations. Most of its legal actions have failed but some ratepayers have had to settle and suffer debilitating legal bills in fighting ratepayer injustices.
7. Even through iPart has capped rate increases to 1.2%, CoN Labor Councillors with the support of the two Newcastle Greens have unleashed a 2.5% increase on Newcastle in the 2022-23 budget.
8. Over 100 business have left the CBD because of bad CoN planning, Supercars and the Newcastle tram been routed on the main street eliminating about 1000 loading zones.
9. CoN has further penalised city traders, customers, visitors and tourists by closing down 365 carpark spaces without improving access or transport or developing a transport strategy.
10. In order to support its super loss event Supercars event CoN commissioned another economic contribution research by that was based on fallacious attendance figures and it highlighted that Newcastle ratepayers were financing flow on Supercars benefits to Hunter tourist and accommodation premises.
11. Despite community funded research that demonstrated the business devastation of Supercars CoN ignored its findings.