To: Minister for Foreign Affairs 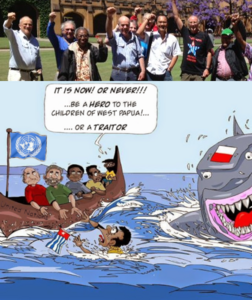 Since Australia voted in 1962 to occupy West New Guinea with United Nations forces, in violation of our Commonwealth & international legal obligations hundreds of thousands of our Papuan neighbours have purportedly been wrongfully killed by the UN appointed administrators while untold $billions have been looted from their homelands. I believe the looting since 1962 of the United Nations occupied territory has created and is contributing to a reckless shift of wealth and authority from the Pacific to South East Asia which has introduced numerous biological problems and social handicaps to the Pacific which should be mitigated without further delay.