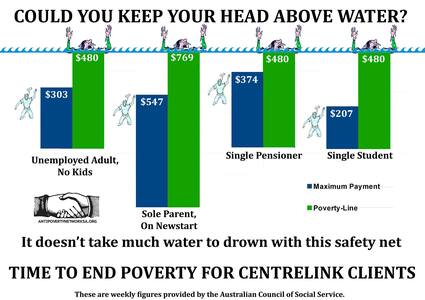 Raise Newstart Allowance by $100 per week.

Newstart Allowance has not been raised in real terms since the 1994 Federal Budget, when the payment was raised by a mere $2.95. Over the last two decades, the payment has stagnated, falling increasingly behind the rest of community, and creating widespread poverty for unemployed people. At $260 per week, or $37 per day, it is one of the lowest unemployment payments in the developed world, and well below the poverty-line.

Newstart is now only 18 percent of the average wage, and 41 percent of the minimum wage. The low rate of Newstart profoundly affects the well-being of unemployed people, as well as making it harder for job-seekers to search for work.

- 40 percent of Newstart recipients unable to pay their bills on time or see a dentist
- 46 percent are only able to afford second-hand clothes most of the time
- 44 percent of those surveyed reported having unsustainable levels of debt, owing more than they could afford
- A majority turn off their heating and cooling to save money
- 32 percent have skipped meals over the past year
- 25 percent were suffering from 'housing crisis' – were spending more than 50 percent of their income on housing
- 20 percent reported not having enough money for essentials like housing, food, and electricity
- 63 percent reported that their income had fallen behind cost of living over the past two years
- More than half are unable to raise $2,000 in the event of an emergency

With government data indicating there are roughly five job-seekers for every job, Newstart is not a short-term payment. Over half of the roughly 750,000 unemployed people in Australia, through no fault of their own, are stuck on the payment for long periods, simply because there are not enough jobs to go around.

Raising Newstart is affordable. The increase could be easily funded through budgetary measures that would not only affect small groups of very well-off people but would raise significant amounts of revenue.

Savings generated from scrapping negative gearing ($15 billion), eliminating superannuation tax concessions for those on high incomes ($10.5 billion), and closing various tax loopholes for big business, could fund the long-overdue increase to the payment, with billions of dollars leftover.

These figures dwarf the cost of raising Newstart: increasing the payment by $100 per week would cost roughly $4.5 billion per year.