Save Eaten Fish (Ali) - bring him to Australia for urgent treatment 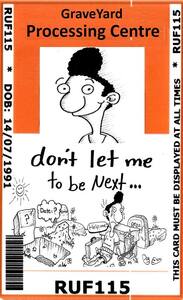 We urge you to bring Ali to Australia for the specialised treatment - in a safe environment, that he requires.

Ali (aka Eaten Fish) is a 24 year old Iranian artist who has been interred in Australia's detention centre on Manus Island for two and a half year. He suffers from severe Obsessive Compulsive Disorder and Complex Post Traumatic Disorder with severe and debilitating panic attacks. In early 2016 Ali was sexually assaulted in the detention camp and is now subject to ongoing sexual harassment and threatening sexual propositions. Although he is under 24 hour guard in the 'Green Zone' - isolation area of Manus Island RPC - this has not halted the ongoing threats of sexual violence.

Ali's condition has been exacerbated by the sexual assault and continues to deteriorate. At times Ali will scrub himself until he is bleeding, he spends up to 10 hours washing and re-washing his clothes day after day, and still feels dirty. Each time anyone touches him he experiences a panic attack that can last hours - some in the camp will touch him in order to see him react. He is often unable to eat as he is afraid of food contamination and is often thwarted by the rituals of OCD that consume him.

Treatment of Ali's conditions and responses to his sexual assault by IHMS have not been in line with currently accepted treatment in Australia. His OCD has been termed a 'behavioural issue' and so he is under the watch of Wilsons Security behavioural management team!

His constant and well-founded fear of further sexual assault and harm have compounded his already fragile existence.

We request that you bring Ali to a safe place in Australia where he can receive the specialised treatment he requires.

Ali (aka Eaten Fish) is a 24 year old Iranian artist who is interred in Australia's detention centre on Manus Island. Ali suffers from severe OCD, Complex PTSD and debilitating panic attacks - sometimes he scrubs himself til he bleeds. Ali was sexually assaulted earlier in 2016 and continues to be sexually harassed and violently sexually propositioned. As a result of ongoing harassment and the sexual assault Ali's condition has severely deteriorated. The treatment that Ali has received has not helped and is not in line with currently accepted treatment in Australia. Ali is at grave risk of further harm and must be brought to a safe place in Australia where he can receive the specialised treatment he requires.