Save Our Westmead Hospital 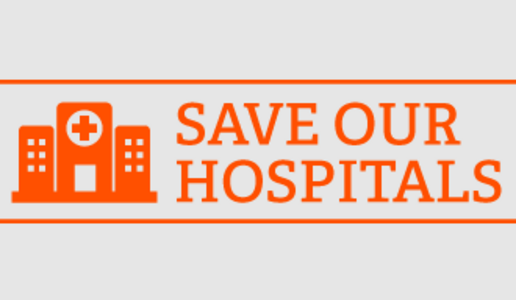 We call on the Federal Government to make a critical investment in our public health system, by fully reversing the full $57 billion in Coalition cuts to public hospitals and essential health services.

According to projections by GetUp, Westmead Hospital could lose up to $690.6 million in federal funding over the next decade. This is roughly the equivalent of 414 hospital beds, or 770 nurses, or 433 doctors.*

These cuts are the outcome of changes to Federal-State funding arrangements made in the 2014 budget, which saw $57 billion ripped from local hospitals over the next decade. The Turnbull Government's recent budget restored just $2.9 billion, locking in $54 billion of these cuts. Meanwhile the Coalition is trying to argue that they have increased health funding.

These enormous funding cuts come at a time when the Australian Medical Association and Australian Nursing ​& Midwifery ​Federation are warning of an imminent crisis unless hospital funding is increased. They could mean fewer doctors, nurses, or beds, and longer emergency room and elective surgery wait times.

But there's hope. In this critical pre-election period, polling shows that protecting our universal healthcare system is the number one vote-changing issue for Australians. The Coalition's attack on public health is clearly ringing alarm bells for voters, and we have a plan to turn the volume up.

In the lead up to this year's Federal Election, people will step up in their local communities to call on their Federal MPs and local candidates to commit to adequately-funded hospitals. Together, we will lay the foundations for a strong and secure future where all Australians can receive the quality healthcare they need.

*The funding loss projections per hospital are based on figures provided by the Parliamentary Budget Office (PBO) and hospital bed figures (2013) provided by the Australian Institute of Health and Welfare (AIHW). The projections are based on the full $57 billion cuts figure and represent our best estimate given the available data. For more information see: http://www.getup.org.au/hospital-funding