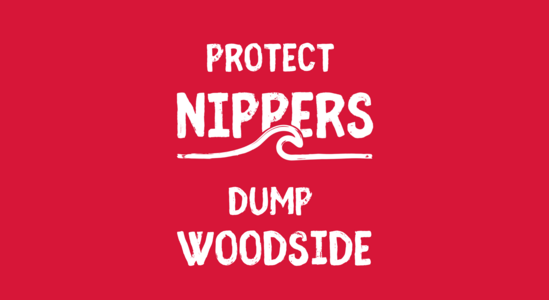 Woodside is a major polluter and contributes to dangerous climate change. Sponsorship of Surf Lifesaving WA and in particular the Nippers programme to the tune of millions of dollars is an attempt by Woodside to maintain its social licence. Dumping Woodside sponsorship is the ethically and morally right thing for SLSWA to do.

Climate change is an existential threat to surf lifesaving as a movement and it is imperative that we act swiftly and effectively. Surf Lifesavers are literally on the front line in dealing with climate change. More intense weather events, heatwaves, extreme temperatures and beach erosion have and will severely impact future surf lifesaving activities with many clubs already impacted.

Sponsorship of SLSWA, and in particular the Nippers programme, by Woodside is a major polluting fossil fuel company attempting to maintain its social licence. SLSWA is obliged to promote health, safety and welfare of members and ensure environmental considerations are taken into account in all surf lifesaving activities. Using children as billboards for a climate-harming business is unethical and undermines surf lifesaving in the long run.

The science is clear, to stay below 1.5˚C warming and dangerous turning points for the planet we must stop all new fossil fuel projects and shift our reliance from existing fossil fuels. As of today, globally we can only emit 325 billion tons of CO2 into the atmosphere before we breach 1.5˚C warming. At current levels of emissions this is expected to occur in 2029. The Australia Institute estimates that Woodside’s proposed Scarborough gas expansion will emit 1.6 billion tons of CO2-equivalent – a significant hit to our global budget which reduces the time available to transition to a carbon neutral society.

Community pressure against Woodside’s sponsorship of the Perth Fringe Festival and naming of the “Woodside Pleasure Garden” has resulted in direct sponsorship of the festival being dropped. It is time for SLSWA to draw a line in the sand and not associate with an organisation whose business is not compatible with restricting global warming to below 1.5 ˚C. Dumping Woodside, along with no future fossil fuel sponsorship, is the ethically and morally right thing to do for the surf lifesaving movement and the planet.

For more details on how Woodside Energy is profiting from contributing to climate change, see assessment by Climate Action 100+: https://www.climateaction100.org/company/woodside-energy/