To: The Honourable Annastacia Palaszczuk, Premier of Queensland and Gold Coast City Councillors 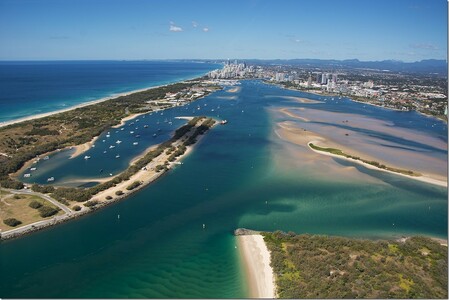 Right now, developer Sunland want to build multiple stratospheric high rises at Mariners Cove (near Southport Yacht Club) on the Spit - & Tony Fung wants to buy & raise the Sheraton to the heavens - all in seeming contravention of the GCCC Local Area Plan - which sets a height limit of 3 storeys on the southern Spit & must be enforced to protect the area. The GC Bulletin reports (July 2015) that Council is "likely" to approve the Sunland proposal and we call on them NOT to approve any proposal exceeding the 3 storey height limit. On 5 August the State has offered ASF 5 ha of public land south of SeaWorld for development - we call on the State to enforce the 3 storey height limits as a precondition to any ASF design being considered. ASF have stated publicly they may build a "Marina Bay Sands" on The Spit. Any approval - State or GCCC - will be the thin end of the wedge - the entire Spit would end "up for grabs" - please help us to defeat these greedy development pushes, which will set a pro-high rise development precedent for The Spit ever after.

The Spit is a vitally important community, tourism and environmental asset. It is a space for people to recreate and a break from the built urban density that is Surfers Paradise and Main Beach, leading to an environmentally significant recreational area defined by Marine Stadium, Doug Jennings Park and Federation Walk. It is vitally important to OPPOSE high rise development on The Spit for 10 main reasons:
1. one approval means the floodgates are open - goodbye low rise Mariners Cove, goodbye low rise Sheraton and watch EVERY other development go upwards - think of the money in this upwards land grab for developers and the losses it poses to the amenity of the Spit and Broadwater surrounds;
2. the GC Local Area Plan Map 26.3 (LAP), which is a product of community consultation and GCCC urban design planning, shows 3 storey height limits for the southern Spit area;
3. developer proposals to flout the LAP plan reflect greed alone; enabling high rise development dramatically increases their return upon investment, regardless of the community, local infrastructure and environmental impacts;
4. all developers who purchased southern Spit lands KNEW when they did so that height limits apply;
5. the community has consistently opposed increasing height levels for decades based upon a range of important issues and this is reflected in the outcomes of the Vision 2020 process;
6. height limits reflect the desire to frame the Broadwater appropriately: it is a precious community and environmental resource and surrounding it with high rises (once Southport became a high rise prime development area (PDA)) disregards its significance as well as increases pressures such as density, traffic, environmental and infrastructure footprint and the like;
7. height limits reflect the fact that traffic density in the area is already significant and increasing population in the area is just not practical; in particular, the traffic within Main Beach and to The Spit every weekend illustrates this fact;
8. importantly, the southern Spit accommodation represents a differentiated tourism product for the Gold Coast which MUST be protected. That is, it is high end, exclusive and expensive accommodation zone which caters for those who do not want a high rise experience. Yes, Justin Beiber stayed in Surfers - but U2 and Bruce Springsteen did not - they stayed at Versace and the Sheraton respectively. Why? Because a low rise, on the beach/ Broadwater experience is something to savour even for billionaires - and our tourism entities should be protecting that, not allowing it to be destroyed;
9. developers are free to construct high rises throughout the western side of the Broadwater in the Southport PD area; at present the hospital site remains open for development- Sunland are free to tender to construct their plans there which will of course yield all of the employment benefits they claim for their project; and
10. finally, we all know that one high rise means every developer will push for high rises from one end to the other of The Spit. GCCC propose draft amendments to the Town Plan (2015) which will facilitate high rise development on The Spit - see zone map 27 Southport (http://cityplan.goldcoast.qld.gov.au/pages/plan/viewerpdf.aspx?vid=10117) . We must protect this precious tourism, community and environmental asset from private exploitation - no matter what our political representatives say or do.

LATEST NEWS- CAMPAIGN IS ON! The State Govt has just announced that ASF have been invited to develop the 5 ha state-owned lands south of SeaWorld for casino/ hotel etc purposes. This area is also covered by 3 storey height limits, but an ASF senior executive has already revealed their expectations in terms of height...
"We can build Marina Bay Sands..." says Hong Kong based ASF chair Min Yang: see http://www.goldcoastbulletin.com.au/…/story-fnjc2dm2-122746…

SO we now have Sunland seeking GCCC approval for 2 x 44 storey high rises just north of Southport Yacht Club, & ASF foreshadowing a "Marina Bay Sands" just south of SeaWorld. And Mr Fung waiting for the high rise precedent to be set.
WE CALL upon the State to impose a 3 storey height limit upon the ASF design process & we CALL upon GCCC to strictly enforce the Local Area Plan as to the Sunland (& any other Spit) development.
PLEASE SIGN & SHARE THIS PETITION S MUCH AS YOU CAN - thanks :)

Development application and all documents are here: http://pdonline.goldcoast.qld.gov.au/masterview/modules/applicationmaster/default.aspx?page=wrapper&key=199260#

HERE is the proposed amended Town Plan 2015 - note the changes to The Spit which may well facilitate high rise development - http://cityplan.goldcoast.qld.gov.au/pages/plan/viewerpdf.aspx?vid=10117. To oppose these changes - email the local Councillor Lex Bell: [email protected]