To: Australia's 8 state and territory treasurers 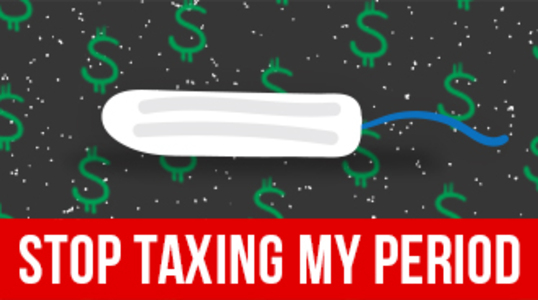 Support a move to remove the unfair tampon tax at the upcoming state and territory meeting.

Since 2000, the Australian Government has taxed every menstruating Australian 10% every time we get our period. It is estimated that our periods earn the government a whopping $25 million each year!

And how can a bodily function be taxed? Because the government doesn't consider the tampons and pads we're forced to buy every few weeks 'necessary' enough to be GST-free.

On the other hand, condoms, lubricants, sunscreen and nicotine patches are all tax-free because they are classed as important health goods. But isn't the reproductive health and hygiene of 10 million Australians important too?

People who get periods don't buy pads and tampons for pleasure, so why are we forced to fork out an extra 10% every 2, 3, 4 weeks? Taxing Australians for getting their period isn't just sexist, it's fundamentally unfair!

To the eight state and territory treasurers, the upcoming meeting on 21 August is your chance to get serious about making life fairer for the 10 million Australians who get their period. Use this once in a generation chance to remove the unfair tampon tax!

RSVP to the rally going down in your city this Friday 14 August, calling on the state and territory treasurers to support the removal of the tampon tax in their meeting next week.
There'll be period-themed flash mobs, human-sized tampons, and seriously sassy speeches! RSVP here:

My name is Subeta and I'm a university student in Sydney. I am constantly confronted with how many people are living below the poverty line and struggling to cope with basic costs. For the 10 million Australians who will menstruate in their lifetime, getting your period isn't just inconvenient and annoying - it's expensive!

Half the population menstruates and they shouldn't be financially penalised for it.

If you still aren't convinced, let's consider some statistics: on average women, who make up the majority of people who use sanitary products, earn $262.50 per week less than their male counterparts, and they are also statistically at greater risk of living below the poverty line. Furthermore, this tax disproportionately targets those who may already be disadvantaged, that is the homeless and unemployed.

So why force this underpaid, at risk and disadvantaged portion of society to pay more for basic essentials?

Right now, the Australian government is reviewing the entire Australian tax system, saying that it's looking to make taxes lower, simpler and fairer. This review is a once in a generation opportunity to put the tampon tax on the government agenda for serious consideration, and get this unfair tax removed once and for all.

Sign the petition and tell Mr Hockey loud and clear that a period is not a luxury or societal burden, it is an aspect of reproductive health. After all, the government should support and facilitate the availability of sanitary products, not actively restrict it.

I want to mobilise support for this issue and flood the tax review with thousands of submissions calling on the government to remove the unfair tampon tax. Once you have signed you will be redirected to a page where you can make a submission directly to the tax review.

Thank you for signing and please don't forget to share the petition too!