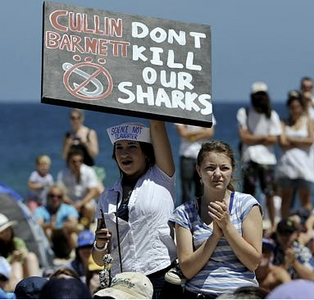 Please do not go ahead with plans to allow shark culling in Western Australia.

It is not humane for the Western Australian government to implement shark culling as a method of reducing the risk of shark attack. When we use the ocean, we are entering a shark’s natural habitat and we should be responsible for our own safety and awareness.

The $6.85 million that the Western Australian government is investing towards shark culling plans, as part of “shark mitigation strategies”, would be better spent towards building public awareness and education, safety initiatives, scientific research into shark behavior and other ethical strategies.

As our Premier and Minister of Fisheries, you can stop the implementation of shark culling and help protect our threatened shark species and marine environment.

We can do better, culling sharks is not the answer.

Experts do not agree that plans to cull sharks will reduce shark attacks. “[W]ill culling sharks actually reduce the risk of an attack? The answer is no.…Pre-emptively killing sharks is a response based on emotion rather than of scientific data”, wrote Ryan Kempster, Shark biologist at University of Western Australia, and Shaun Collin, Winthrop Professor at the School of Animal Biology and the Oceans Institute at University of Western Australia1.

The Department of the Environment lists nine shark species inhabiting Australian waters as critically endangered, endangered or vulnerable and culling plans would not only drastically affect their populations but the surrounding marine ecosystems.

Please sign the petition and tell the WA government that to stop plan to cull sharks.

The tender that will allow the WA government to implement a shark kill policy will be decided sometime this week, please share the petition so we can gain as many last minute signers as possible.
Thanks so much for your support!