To: Prime Minister and the Opposition 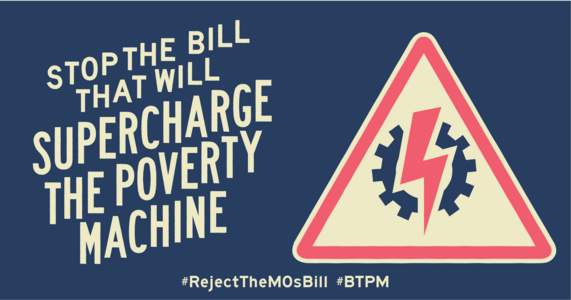 The Australian Unemployed Workers’ Union is calling on the Morrison Government to abandon their dangerous ‘mutual’ obligations bill. The Labor party and crossbench MPs must join us in standing against this bill, and oppose it in no uncertain terms. This bill will supercharge the brutal poverty machine the government inflicts on people who need support. They must #RejectTheMOsBill.

The ‘mutual’ obligations bill has all of the hallmarks of another Robodebt. The new online employment services model is confusing to understand and will be able to penalise people financially if they are unable to use the system or make a mistake with the information they enter. The people hit hardest will be those who can’t easily use a computer or can’t get easy access to the internet.

People on Centrelink payments already have to survive for at least 7 days without any support at all before they qualify. The changes to payment backdating in this bill financially punish people who try to understand their rights. In effect it is yet another cut to the woefully low income support payments that are half the Henderson Poverty Line, which is currently $82 a day. On average, people who apply for a JobSeeker or Youth Allowance payment will lose about $457 per person. The government has estimated that about 10,000 people per year would lose more than $1,000 each from their poverty payment. This represents a saving of nearly $200 million for the government at a time when unemployed people are more in need of support than ever – and that money is not being reinvested in services that care for people.

It’s why the Morrison Government is trying to slide this bill through unnoticed. Last year the spotlight was on unemployed people, but now they think they can just carry out this regime of brutalisation without anyone noticing or caring. Please help us show them they’re wrong.

A huge national petition would lift the lid on Morrison’s sinister plan and expose his cruelty, right as his approval ratings are tanking.

Can you sign our petition demanding that Scott Morrison abandon the ‘mutual’ obligations bill and asking the Labor party to do the right thing by their constituents who will be hurt if it passes?

It is undeniable that the ‘mutual’ obligations system needs a major overhaul at the very least, but this bill is not the way to do it. It introduces hundreds of pages of amendments without any substantive positive change, and the government hasn’t given anyone enough time to fully think through the consequences of these changes.

Ever since the start of the Coronavirus pandemic, the government has suspended mutual obligations during periods of lockdown. This is an admission that mutual obligations make things harder for the unemployed and underemployed, so it makes zero sense that at the same time they're trying to make it even tougher through this bill.

In addition, research shows that if you do mutual obligations it is harder to get a job. There is hard evidence to back up this claim, so these changes appear to be nothing more than purely ideological.

This is a dramatic overhaul of a law that is crucial to protecting vulnerable people and the department can’t even explain the potential implications of some of these changes. The PJCHR raised many concerns about this and the need for more information. There are numerous worrying changes proposed in this bill, including;

Removal of backdating payments, potentially leaving recipients up to $457 worse off
A new points based system that gives points for things like attending a job interview, which is not in a recipient’s control.
Automated decision making. This won't just apply for mutual obligation penalties, it will be delaying people's payment starting at all. What happens if there's a problem with the online system? Time and time again we have seen that we can’t trust this government to implement digital solutions.

Together we can expose this latest attack on unemployed people and make sure Morrison feels enough political pain to reconsider the welfare bill. But we need all of our voices. Sign our petition!