To: Minister for Health, Sussan Ley 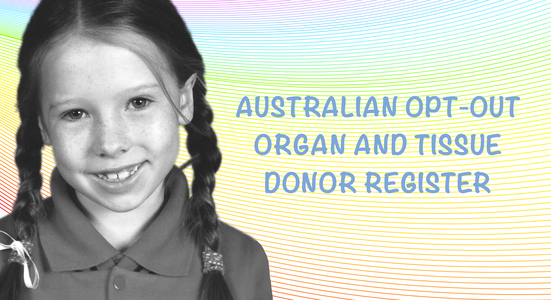 My name is Allan and 10 years ago my family tragically lost our 7 year old daughter, Zaidee, to a cerebral aneurism.

Zaidee was the only child in Victoria under the age of 16 years and one of the youngest Australians to donate her organs and tissues. She was only 1 of 6 children nationally to have donated their organs that year.

As a family we had been registered as organ and tissue donors for 5 years. This decision, and Zaidee's wish to be a donor, meant that the lives of 7 people (6 children and 1 adult) were improved and in some cases saved by Zaidee's gift.

Currently Australians must opt-in to become a registered organ donor. This means that many people who intend to be donors either do not register before their death, or are unaware of the process. An opt-out system would increase the number of organ and tissue donations each year, reduce the number of people waiting for a transplant, and inspire every Australian to have a honest discussion about their wishes to be, or not be, a donor.

An opt-out system would save lives.

It is estimated that just under 1% of people that die in hospitals can potentially be an organ donor – that's approximately 75,000 potential organ and tissue donors per year.

Spain, the country with the world's highest rate of organ donation, has an opt-out system in place.

An opt-out system would not mean that all hospital deaths were automatically considered an organ or tissue donor. What it does mean is that everyone is considered a possible donor unless they, or their immediate family, remove them from the register.

An opt-out system is just one step towards saving lives, but it's an important one. Let's make this change now – for the 1,550 people waiting for a lifesaving organ donation, there's no time to waste.

Our organisation, Zaidee's Rainbow Foundation, will deliver a copy of all signatures to the Health Minister, who has the power to implement this change.

Over 3,000 signed up already, but still a long way to go. How many I need to make a difference I don't have a clue, but what ever it takes to get discussion happening around this subject is what I am good at.

A great interview with Ch9 Today Show and Lisa.

Recent interview with ABC TV on the 10th anniversary of Zaidee donating.
http://www.abc.net.au/news/2014-12-02/zaidees-legacy-inspiring-families-to-discuss-organ/5933030