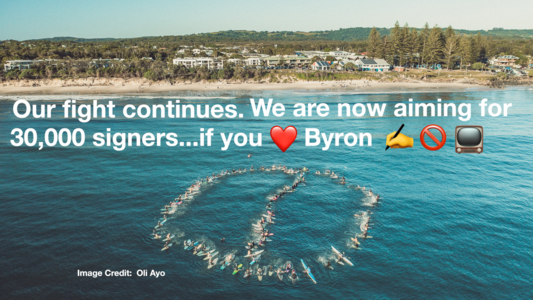 The environment and community of Byron Bay and the larger Northern Rivers region are being used as a filming backdrop for a "docu-soap" titled 'Byron Baes'.

From Netflix ANZ: "It is a truth universally acknowledged that an influencer in possession of a good follower count must be in want of a beach backdrop (for the ’gram).⁣⁣⁣ ⁣And there’s no better backdrop – or magnet for influencers – than Byron Bay, the perfect setting for our next Australian Netflix Original."

We, the community and those that love Byron want all relevant statutory authorities to refuse to grant the production filming permits for any and all local and state government land, roads, parks, and waterways proposed for use during filming of the series. We further request that any filming permits already granted be rescinded in light of the detrimental impact to both our community and the environment.

We want the local government areas and state based authorities to prioritise community concern about the impact of the series in line with the relevant filming permit policies:

Byron Shire Council has the responsibility to provide equitable access, care, control and management of the areas under its management and to ensure activities are carried out in an orderly manner which minimizes impact on the community.

Policy
1. The NSW National Parks and Wildlife Service (NPWS), part of the Department of Planning, Industry and Environment (the Department), will favourably consider all proposals for commercial filming and photography that do not compromise park values, visitor amenity or cultural values.
2. NPWS will maintain a cooperative working relationship with film makers and photographers, including for filming that is in the public interest or benefits parks and the conservation of biodiversity and cultural heritage.
3. NPWS will protect the conservation values of parks through assessing the environmental impacts of filming proposals and by placing appropriate conditions on filming approvals.
4. Filming applications will be considered by assessing the potential impacts of the filming activity while recognising the diverse benefits the filming may have to parks, for the public and for NSW in general.

We, the community of Byron, Ballina, Tweed, and Lismore Shires are not the perfect backdrop for this series. We are a community experiencing significant challenges driven by influencer culture and rapidly shifting demographics of residents. We do not want to be cast as the perfect backdrop and magnet for social media influencers. We do not want to appear in 'Byron Baes'.

We want our voice to be heard and we do not want to deal with the fallout of being showcased on a global stage in a way that can only harm our local environment and community.

If you love Byron and think it's worth signing up to stop the 'Byron Baes' production show your love for postcode 2481 today!!

We are now inviting all those that love Byron to sign the petition. Please share as far and wide as you can.

Thanks for all the incredible community support. Let's keep the signatures rolling in! Please send us a message about the petition if you run a local business that has declined to participate in the series - we would love to keep updating our list of local legends at venues and retailers that have said no to the 'baes'. Social Media assets (for stories and main feed) downloadable here: https://bit.ly/2OWKiJv