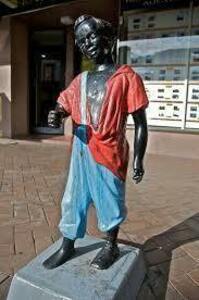 Permanently remove the 2 statues of Jocko: the little black boy statues from High St, Maitland NSW and inside The Mutual bank in Maitland NSW as they do not hold any historical claim to Maitland NSW and are based on early depictions of offensive caricatures of African people in past times.

With the global Black Lives Matter movement in the media at the moment this has also put the spotlight on other forms of institutional racism in Australia.

For me this has led to my own personal reflection about racism and the effect it has had on my own family and community. For several years I have complained to the Maitland Council about a racist statue in Maitland called “jocko: the little black boy”. Pic below. Apparently it has been around since the 1800’s and was once used as a hitching post for horses back in the day. This statue represents a racist caricature of an African boy in a subservient role. Not to mention it’s links to slavery. Blackface is not acceptable so why should a minstrel style statue be acceptable in a public place in 2020? It is symbolic of a time and culture that demeaned and dehumanized people of colour.

I have written to council many times to ask them to permanently remove both statues but they have either not responded or responded by saying that it’s been around since the 1800’s and they have no intention of removing them.

I would like to seek you support with this petition and present it to Maitland Council with a clear message that this racist symbol has no place in our community. I would like to ask if you also find the statue offensive and agree it should be removed immediately could you please join us in signing the petition and circulate it as widely as possible.