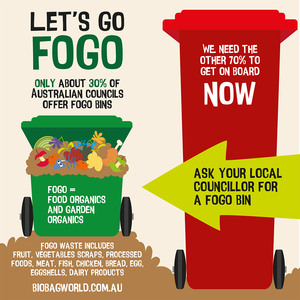 Canterbury-Bankstown Council have proposed to increase our council rates by more than 30% over the next 5 years. This is being done at the same time that FOGO (a significant cost-saving project) has been trialed but not implemented. We want our council to implement a FOGO system like Penrith Council did in 2009 who is saving $2.1 million per annum** by separating food scraps from general rubbish and converting it into compost.

Implementing FOGO will help council rates stay as low as possible. In addition it will deliver environmental benefits as methane gas (a significant contributor to climate change) is released when food scraps are included with general rubbish. This project is a win-win....a win for your hip pocket as well as the environment.