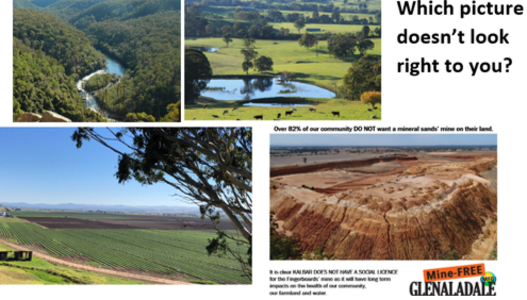 We need urgent global awareness and action to halt the development of a toxic mine on the Mitchell River, adjacent to one of Australia's most important food bowls.

The Lindenow Valley vegetable growing area is only 500m downwind from a proposed mineral sands mine in Glenaladale, East Gippsland. We want the Australian public to know that the area where their veggies are grown is under threat from this mine that is being proposed in an already severely drought and fire affected area, and a traumatised community.

If this mine proceeds it is highly likely their veggies will be contaminated from radioactive and highly toxic substances, as well as putting at risk up to 1,500 jobs.

If the more than 4GL of water that will be needed by the mine for processing and dust suppression was redirected to growing vegetables, five times more jobs would be created than the 197 jobs the mine proposes to create.

82% of the directly impacted landholders said, in response to a survey question, that they want their land mineral sands mining free.

Kalbar is an investment company not a mining company. They propose to dig up 1600 hectares of farm land above subterranean water courses to reach ancient sand dunes 45 metres down, which contain a spectrum of useful but toxic and or nuisance chemicals including Zircon, Rutile, or Titanium Metals with traces of Thorium in the region of the RAMSAR listed Gippsland Lakes.

The company proposes to create ten pits from which heavy mineral ore will be extracted and processed on site before transport by road to a port in Gippsland where it will be loaded on to ships for Worldwide distribution.

The mining company, or another entity that may buy the mining lease from Kalbar if approval is granted by the Victorian Government, will not be obliged to restore the properties to the state they were in prior to mining commencing. In this conflict, the farmers and some of the landholders of Lindenow, point out that their properties are watered from under the ground by aquifers that fill a chain on ponds even in times of drought. They believe that those water sources are below the surface of the land and above the ore body that will be extracted by open mining techniques. They contend that if approved, the mine will destroy the water courses making restoration of their properties impossible.

In addition, the East Gippsland region was recently severely impacted by drought and then bushfire and we cannot afford this blatant destruction of our already damaged and fragile environment.

A recent Queensland (2018) mine did not have the financial capacity to restore hundreds of square kilometres of land following a disastrous mining venture. Dont let this happen in our back yard!