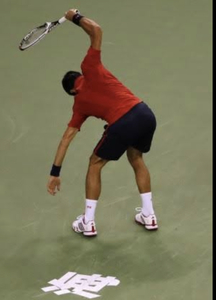 Let them know that it’s not okay to smash your racket and secondly if you’re going to smash your racket then clean it up yourself, and not be waited on by a little ball girl to sweep It up. Taking several minutes out of the game of tennis and programming the minds of many Australians and tennis lovers worldwide that this is not okay.
Years ago it used to be called racket violation and players like John McEnroe were penalised for smashing their rackets in public, Now the world number one Djokovic and other players create a longer break and rest while they have angry outbursts with their public display of violence.

Secondly it is cleaned up by some young obedient Australian, who may look up to the player as a role model.

Please help reinstate this important code of conduct, just as it was in the past may it be so for future generations. Let us model dignity, self control and resilience to the rest of the international tennis community.