Make Summerleas road safer for all, people and wildlife. 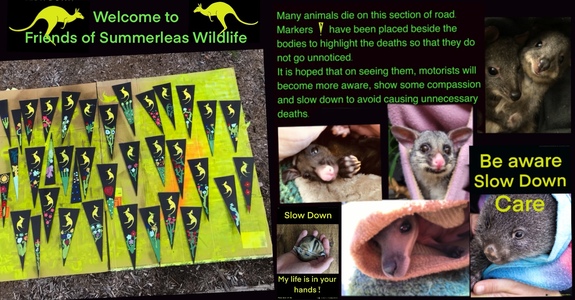 The residents of Summerleas rd, neighbouring arterial roads and concerned members of the public request that the Kingborough Council act immediately and implement measures to increase safety in the 550 metre section of road between the Huon Highway intersection and Lesley road.

We are concerned for the safety of all road users including pedestrians, cyclists, dog walkers, horse riders and wildlife that traverse the road.
Speeding drivers ignore speed limits and fail to drive to the conditions killing wildlife at night and increase the risk of accident and injury to people in the day time.
Wildlife deaths occur almost every night in this well known black spot. The average for the whole of Tasmania is one wildlife death per 3 kilometres. At certain times of the year this section of Summerleas road has recorded an average of one death per 8.5 metres.

A total of 65 wild lives were lost on this section of road between the 4/9/21 and the date of this petition.
This figure does not include at least 9 known joeys that also died along with their mothers and 3 injured animals that had to be rescued and euthanised due to the severity of their injuries.
The Natural Values Atlas lists 3 threatened mammal species of concern for this area. They are the Eastern barred bandicoot, Eastern quoll and the Tasmanian devil. Several Bandicoots have been killed recently on the road. Eastern quolls and Tasmanian devils have been sighted (and devils accidentally trapped) by residents on properties close to the road.

The phycological effect on the community that witnesses this amount of death on such a short section of road must not be overlooked.
The danger to human life of injury and death is just as real and also needs to be addressed.

There is a concentrated population of horse riders in this area, and close surrounding areas and a long established horse agistment centre actually within the section of road that is our major concern.
To reach the few safe and designated riding trails that exist, riders must ride through this section as they have no alternative choice. There have been many incidents of very near misses involving horses, their riders and inconsiderate and speeding drivers.
There are no safe pathways or verges. The road has at least one dangerous blind corner and is quite narrow in places with nowhere to safely get off the road. The shoulders are narrow with significant ditches and areas where the ground drops away steeply while other sections have a high embankment. These conditions make it dangerous for horse riders, cyclists, dog walkers and pedestrians in general. Many school children regularly walk to and from school bus pick up, and drop off points.
The community includes cycling enthusiasts and people who regularly walk their dogs. Both groups also report incidences where an accident has only been averted by sheer luck, including a dog (on lead) that was lucky to escape with severe bruising after an accident involving a speeding driver.
The road is undoubtedly a shared zone and drivers need to be alerted to that fact and encouraged to drive appropriately.

Signage alerting drivers to the wildlife death black spot need to be installed and a reduced dusk to dawn speed limit imposed.
It has been well studied and documented that a reduction of speed between dusk and dawn would reduce the wildlife deaths on Tasmanian roads by a huge amount. (Hobday 2010 )
Some estimates suggest as many as half the estimated annual 500,000 animals could be saved by reduced speed between dusk and dawn.
Other mitigation initiatives should also be explored such as speed humps and new generation virtual fences designed for Tasmanian conditions and wildlife.
Other options could include community based and created art works that highlight the issues and engage the public in creative and new ways.

The people who have signed this petition request Kingborough Council implement speed restrictions, signage and safety measures to make this particular road a safer place for everyone, people and animals.