No to more waste at Hampton Park Hill 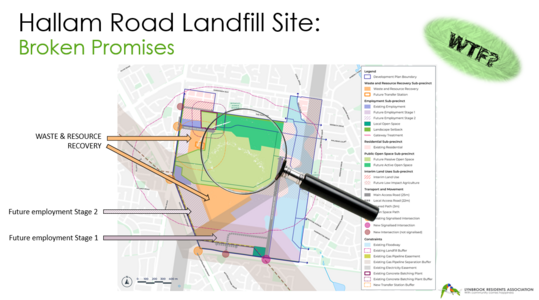 The undersigned say categorically NO to any use of land at 274 Hallam Road, Hampton Park Victoria and adjoining properties for any purpose other than open space, and object to all waste components proposed in the draft Hampton Park Hill Development Plan by the City of Casey.

In 2022 the City of Casey released the draft 'Hampton Park Hill Development Plan’ which proposes to continue use of the landfill site as a regional hub for waste. We want to make it clear that we totally object to this proposed 2022 development plan. Further we say no to any land use on this site other than repatriation into open space and park land.

The Lynbrook Residents Association leads this campaign on behalf of the undersigned and other concerned residents, who will consider all means necessary to fight this proposal including a class action, for which there is already a legal precedent within Australia.

The long suffering residents of Lynbrook, Hampton Park, Narre Warren South and Cranbourne North have paid a heavy price for poor planning of residential land around the boundary of the Hallam Road Landfill since 2001. They have endured continual noxious odours and putrid smells from the site as well as dust, large trucks, and many health & safety concerns. Since this time, residents have continually been told the land would be repatriated to open space and parkland, a reward for their tolerance and patience. Instead of ceasing operation when the tip is full (approx. 2025), as promised for many years, the proposed plans propose a Waste Transfer Station to remain on site for at least another 30 years, with a proposed 1806 tonnes of waste per day. This proposed 550,000 tonnes of waste per annum would be delivered, compacted and removed off site by B-Double Trucks, all on our local roads, 7 days a week and up to 16 hours a day.

As late as 2019 in the Hampton Park development plan, (section 4.2.4) the City of Casey stated their objective for this land was :- “To progressively rehabilitate and develop the quarry/landfill site, upon cessation of current operations, for the purpose of public open space.” Now the 2022 proposed plan is anything but that. We have lost about half our public open space and most importantly if this plan goes ahead we will have half of Melbourne’s waste (10 municipalities) still coming to our doorstep for another 30 or more years. WE HAVE HAD ENOUGH and we STRONGLY SAY NO!

In 2018, without consultation, the Metropolitan Waste and Resource Recovery Group (MWRRG) identified this as a site of State significance as a resource recovery hub, whilst the residents still continued to be fed the lie of open space.

Home owners within the landfill 500 metre buffer zone (at least 1350 homes) will have an overlay added (under section 32) that restricts what owners can do to their own homes! This will affect house prices. Want to put in a granny flat on your home in 10 years? Read this –“To discourage intensification of existing sensitive land uses and development within the landfill separation buffer area through RESTRICTIONS on subdivisions, development of second dwellings and dependent persons unit.”

In February 2020 all City of Casey Councillors were stepped down. Since then we have had no publicly elected council. Decisions of this magnitude should not be made without democratically elected councillors who can represent the views of the community.

25 years of waste to Hallam Road is more than this area can take. We need a break and we need Government to consider a more suitable local option such as the Taylors Road Landfill which is 1km from the closest home, or consider another non-residential space.

No Tip
No Waste
No Transfer Station

No Tip
No Waste
No Transfer Station

This petition is addressed to all levels of local and State Government and the undersigned clearly state that we say no to any development for waste purposes, and will only accept the repatriation of this site to the parks this weary community deserve.

We won’t rest until a new Development Plan is proposed that goes back to what was promised. PUBLIC OPEN SPACE ONLY

Please SIGN below if you wish to support this cause. Every signature counts. We need to make our voices heard. Tell your friends and family to join us. WE SAY NO!